44 hours per week for life, liberty, and the pursuit of happiness (Part 2 of a weekly sort-of-fiction series) 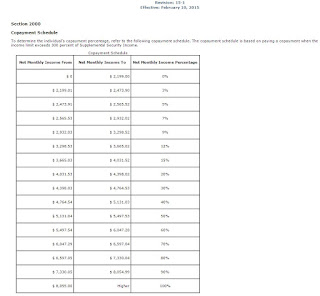 “You wanted to see me?” Lilianna asked her supervisor who called her into her office at the end of the day.

“I know this was your first day on your own out there, so I was hoping we could debrief if that’s okay with you.”

“Yeah. Absolutely,” said Lilianna as she took a seat across from Jackie’s desk.

“So let’s start with your first consumer of the day.”

Lilianna looked down at her file and frowned a little. She sighed and scanned her notes. Even though she had only visited five clients her first day, her discussion with Constance stood out from all of her other interactions, like a mysterious hair poking out of a lump of mashed potatoes. She went from house to house tense and on the defense; nervous about questions she couldn’t answer; nervous about tears falling out of big doll eyes; and most nervous about sarcastic responses to questions about activities of daily living.

Thankfully, none of the other consumers were like Constance, and that was both good and bad. It was good because no one challenged the assessments. In fact, some of the consumers were actually incredibly gracious for just a few hours per day. It was bad because Lilianna went into homes that showed obvious signs of neglect, and met with individuals who needed way more than the waivers they qualified for could provide.

“A challenge? Tell me about it.”

Jackie turned her desk chair towards her computer and pulled up Constance’s information on the screen.

“How many hours did she assess for?”

“Forty-four per week? Why that’s pretty much at the maximum for that program. And she was upset about that?”

Lilianna flashed back to Constance blocking the doorway to her bathroom.

“Did you tell her that?”

Jackie put her hand up to her brow and massaged it.

“That you found the maximum to be a little harsh.”

“Not exactly?” Lilianna’s voice cracked and she cleared her throat.

“Well, it’s not harsh.” She closed Constance’s file and spun her chair back around to face Lilianna.

“You have to remember, Lilianna, that this is not an entitlement program. We have very limited funds issued for this particular waiver, and they need to be dispersed efficiently. We also need to remember that Constance is under a waiver for the working disabled. She probably makes more money than the two of us combined. She probably can afford to pay for extra bathroom…er…meditation time.”

Lilianna remembered Constance’s duplex. It wasn’t a dump, but it wasn’t the greatest either. It was about seven hundred square feet, with one bedroom and one bathroom. Also, Lilianna had copies of Constance’s income pay stubs in her file. Their incomes were actually pretty close to the same, and Lilianna could barely afford to live on her own. Lilianna shook her head.

“She makes about as much as I do.”

Jackie blinked hard and Lilianna got the feeling that her boss felt her first twinge of regret for hiring her.

"Do you want this job, Lilianna?”

Lilianna felt like she had been instantly punched in the kidneys.

“Then you need to get a little tougher. That’s all I’m sayin’. There will be many Constances who will try to make you feel guilty and who will try to bully you into changing the rules or giving more than you can give. It’s not your problem. Constance will figure it out. She will do what it takes. If she really, truly, needed more time, there’s no way she’d be able to have gone to school. There’s no way she could work. If she’s really that disabled, she should probably be considering some kind of assistive living facility, group home, or maybe even a nursing home. Visions of Independence is an agency for fighters. It is for folks who can live independently in their communities. Some of our consumers have been babied by mom and dad for most of their lives and have developed a lot of characteristics related to learned helplessness. Don’t pity these folks and don’t feel sorry for them. If you do, I don’t want you here.”

Jackie and Lilianna stared at each other. Lilianna’s eyes welled-up with tears. She was afraid to blink and set them free to roll down her face. She breathed in slow and looked up towards the florescent light above Jackie’s desk. Lilianna thought of Constance, who definitely didn’t seem like the kind of person who wanted pity, but she also didn’t think she belonged in a facility. Maybe Constance was just dramatizing her situation? Maybe it wasn’t that bad? Maybe she was displaying characteristics of learned helplessness and all Lilianna needed to do was give her some tough love?

“Sorry for what? For taking this job? For caring? For letting it get to you?”

“I’m not sorry for taking this job. I guess I’m just sorry for…” Jackie handed Lilianna a tissue. She blew her nose and blotted her eyes.

“Do you want me to finish Constance’s assessment? I won’t put up with any crap from her.”

Humiliation washed over Lilianna at the thought of her boss not thinking she was tough enough for the job.

“Well, let me know if you want me to call Constance with the results of the assessment. Sometimes they can get irate when they hear about their co-payments, or when you have to negotiate the hourly wage they pay their attendants.” Jackie spun her chair around to look back at Constance’s file. “It’s looking like Constance is going to have to pay a 7% co-pay, which will be approximately $154 per month.“

"And her attendants’ wages?”

“Our program gives consumers the ability to pay $8.05 per hour for their attendants.”

Lilianna’s mouth dropped open a little. Six years ago, when she was in high school, she made $9.00 per hour working at Wendy’s.

“How does anyone find people to work? Please tell me they get benefits.”

Jackie shook her head no. “Nothing. No overtime. No retirement.”

Lilianna sat stunned. How would Constance even find anyone to work for her? Maybe she would have Jackie make the call to Constance.

“Jackie, how - why - does anyone do this program?”

“I’m sure they figure it out. We just do the math. Sure, our consumers, especially the entitled ones like Constance sometimes complain and write their congressmen, but the bureaucracy gets them nowhere fast. When the complainers get feisty, I’ll give them the name and number to our local I.L.C..”

“Our Independent Living Center. It’s a peer-led disability advocacy organization. These opened up all around the country in the eighties. A lot of them get funding from government sources now, so you know how that goes.”

“Will they help her?”

“Some do. A lot of time if you give consumers the number to the I.L.C., it will at least not make you look so powerless. Plus, you can count this on your outreach log.”

“Well, thank you so much, Jackie. I’ll definitely do that then,” Lilianna said and closed Constance’s file.

“And just let me know if you need me to make the call to Constance. I’ve been doing this for much, much longer than you have and don’t put up with whiny and spoiled behavior. You can shadow me if you wish. Tomorrow, I’m going to head over to the house of probably our most demanding and obnoxious consumer. She’s big into ADAPT.”

“That’s the activist organization for people with disabilities. The one on the news sometimes. There’s usually this guy in his power chair with a big gray afro. You’ve heard of the slogan, ‘Nothing About Us Without Us’?”

Lilianna flashed back to her chapter on disability history from college.

“Could I also tell Constance about ADAPT?”

“Just when I think you’re getting it, you ask me a stupid question like that,” she laughed. “Absolutely not.”

“Don’t worry about it. Forget I mentioned it. But no, please do not send her to ADAPT.”

“Now let’s talk about your other visits today.”

—
Later that evening, Lilianna finally made it home to her small apartment on the south side of the city. She kicked off her heels as soon as she walked in the door and flopped fast and hard onto the sofa for a few minutes until she remembered that she had to pee. When she went into her bedroom, she saw her birth control pills resting near the edge of her dresser. She smiled and thought of Constance.
As she peed, she thought of Constance.

As she wiped her ass, she thought of Constance.

As she changed into her pajamas, she thought of Constance.

As she prepared her dinner, she thought of Constance.

And that night, as she tossed and turned in bed, she thought of Constance.

Image Description: A screen-shot artifact of a co-payment schedule for a person who receives personal attendant services and is working with an income that exceeds 300 percent of Supplemental Security Income. The co-pays range from zero dollars owed if a person makes up to $2,199 to 100% owed if the person makes more than $8,055 per month in net income.
Posted by Emily Wolinsky at 4:03 PM